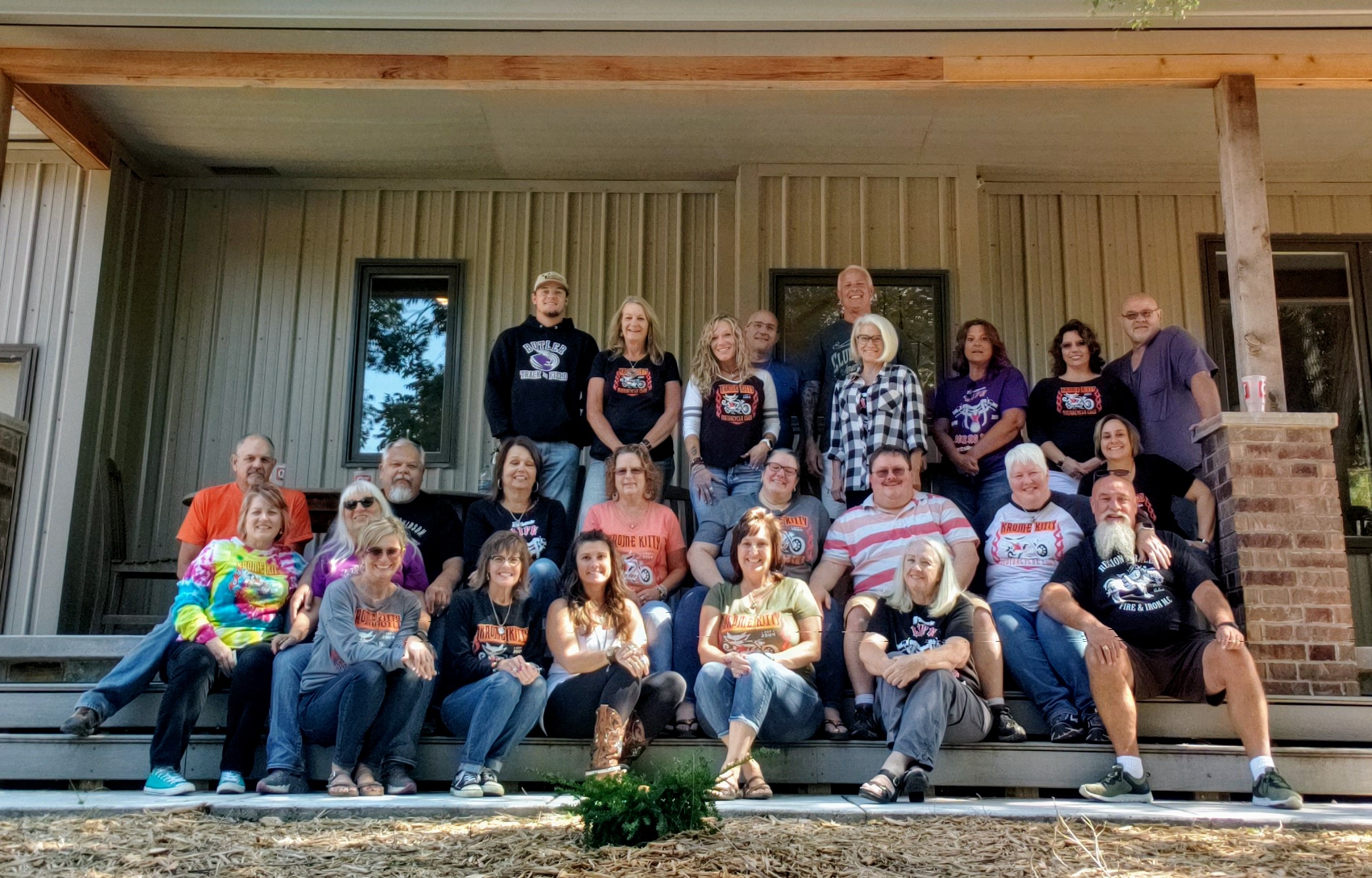 We had such a great day planned for the 2019 Tom Kat ride on September 22nd. Take a nice ride through the Kansas countryside to Wilson; have a delicious lunch at Made From Scratch where everything is…well, made from scratch; stop by the World’s Largest Czech Egg (which we have tried to do before but weather kept us from going); and then ride to Kathryn’s for yummy dessert. Thirty-five Kitties, Toms and friends had signed up to go. The groups had been divided and Lead Kitties and Sweep Kitties assigned. Everything was all systems go. Wait. What’s that you say Miss Weather App? 80% chance of rain at the exact time we would be leaving? Better get a Plan B set up….again.

I reached out to Kathryn to alert her of the weather forecast and she was way ahead of me. She had been watching it, too, and already had an idea for a Plan B. I love it when a Kitty does all the thinking for me! She suggested if we couldn’t ride to Wilson for lunch that we all jump in our cars and come to her house for lunch and dessert. “Are you sure Kathryn? That’s potentially 35 people!” Kathryn scoffed at my silly question and said, “That ain’t nothing, I’ve fed way more than that before.” Why am I not surprised?

So, with the promise of an announcement by noon the day before of whether it as Plan A or Plan B, we hoped for the best and expected the worst. All that morning before, I was watching the forecast on my phone like it was a Bradley Cooper movie. True enough it had improved, but only by 10% and with the kind of wet riding year I’ve had, I knew I couldn’t chance taking 35 people out in a potential thunderstorm. Kathryn, you’re on deck!

That Sunday morning dawned very ominous with lots of darkness in the direction we would be heading. I was actually relieved because the last thing you want to have happen is calling off a riding event and then have it be a bright sun-shining morning. This was definitely not that. The numbers of Kitties, Toms and friends had dwindled to 24 and with the exception of Shelley, who had gone directly to Kathryn’s to help her get ready (thankfully, because Shelley said Kathryn had absolutely nothing done when she arrived. Anyone else besides me think Shelley is a liar liar pants on fire? heehee), and Bobbie and Kari, who were coming from a pre-lunch shopping excursion, we all met at the QuikTrip; grabbed to-go beverages; Kim pimped the 50/50 tickets; and we grouped four by four into cars, with one lone rider. Cindy’s son, Kendal, snubbed his nose at those dark clouds and said “I ain’t no pussy(kat)! I’m riding!”

In far less time than it would have taken us to get to Wilson, we arrived in the metropolis of Hutchinson, Kansas. Kathyrn welcomed everyone into her charming and lovely home and thanks to the assistance of Shelley, there was an abundance of wonderful food spread across the countertops. We all starting filling up plates and after everyone had a chance to bite into our sandwiches, we realized this was no ordinary bread. People started raving about it and Kathryn reported that she had made it. Wait….you made dessert for all of us AND you made your own freaking bread?! Way to make us look like low-achievers Kathryn! Of course, that then started the litany of comments that included…Did you milk your own cow to make the cheese? Did you butcher your own pig and cow for the meat? Did you grow your own lettuce and tomatoes? Did you grow your own wheat to make the bread? Kathryn said no to all of the above, but I guarantee you not one of us would have been surprised if she would have said yes.

After having firsts, seconds and even thirds if you wanted it, the most amazing thing happened. Out from another room, Kathryn brought, and kept bringing out, pie after pie and a layered cake! There was a chocolate pie, a banana cream pie, a cherry pie, a coconut cream pie…wait, I’m not done yet…a lemon pie, a pecan pie and a Betty’s Buttermilk Cake that she couldn’t just make as the recipe directed; she had to add a raspberry filling! It was a literal mob scene when those desserts came out. Everyone scrambled to cut a piece, or two, or three and some got a bigger plate because those little dessert plates just weren’t going to cut it. Lori, on more than one occasion, tried to claim one whole pie as her own, but was forced to share by the outraged pie eaters. There were so many choices and each one was just as delicious as the other. I don’t know how Kathryn did it – making seven desserts in one day. I make one cake and I need a nap.

Kathryn gave tours of her home, but somehow Christine and I missed the guided one and took one of our own. I gotta tell you, Kathryn’s got a little slice of heaven out there in Hutchinson. It’s like she’s out in the middle of the country without a soul around her, but yet she’s not. In fact, her daughter and her family lives right next door, but you can’t see hide nor hair of any of them. There are so many trees separating Kathryn from seeing anyone and anyone from seeing Kathryn that it makes you wonder if there’s any skinny dipping going on in her pond…yes, she has her very own pond…with a bridge on it. Her home itself is so delightful and welcoming. If you followed the process of her building it on Facebook, then you know she literally built some of it herself and lived in her detached garage while doing so – for over a year! One side is where her truck lived (and still lives) and the other side, separated by a wall and a door is where Kathryn lived. Kim wanted to go home right then and there to get her stuff and move in that darling apartment, but there were all the cats and dogs. What would she do with them? Decisions. Decisions.

There were so many things to love about Kathryn’s house, but here are my top three favorites:

After all the good eating and house-touring and oohing and ahhing, it was time to draw the 50/50 ticket. I gave our lovely and gracious hostess the honor of drawing the ticket and I’ll be darned if that lovely and gracious hostess didn’t win! Hopefully, between the $61.00 she just won and the collection we took up in a plastic cup, it was enough to reimburse Kathryn for all the food she purchased, but something tells me it was not. Congratulations Lady! Sorry you had to use your winnings to feed us!

After taking a couple of rounds of group pictures, I spent just enough time outside talking to some of the Kitties to miss the entire clean-up process that was going on in the house. When I felt I had given it sufficient time, I went inside and asked “Anything I can do to help?” The clean-up crew of Lori, Suz and Nellie shot me that “too little too late” look and as they were putting the final touches on everything and said, “We got it.” What we got was Lori in the pantry trying to figure out a way to stuff an entire pie in her purse!

So, it may not be what we planned to do on September 22nd, but I gotta say it was the best Plan B ever! I can’t thank Kathryn enough for hosting, with very little notice, a lovely lunch and sharing her beautiful home with us. She got several marriage proposals that day because who wouldn’t want to have Kathryn as your cook, baker, builder and candlestick maker? I vote we change Kathryn’s Road Name to Wonder Woman!

As a final note, in talking to Kathryn on the following Thursday, she shared a picture with me. Are you kidding me?! In the four days since we had been there, she put in raised garden beds! I feel so inadequate….

Those on board for the A Slice of Heaven and Pie day were Queenie and Greg, BatKat and JT, Sycho Suz and Jim, Sugar, Boom, da Vinci and Gene, AliKat and Gary, Glitter and Dorrin, Twisted Angel, Shelley, Julie, Lil Pibble and her guest Kevin, Medusa, WildKat and her son Phone Kendal, Star and Tink.