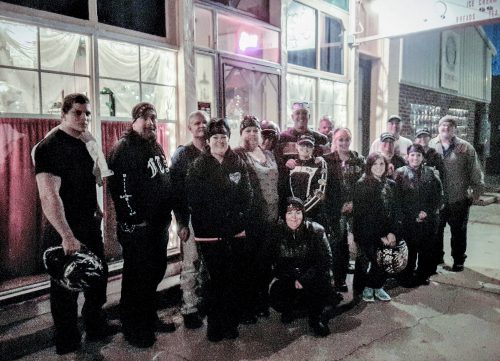 September is a milestone month.  The weather starts to cool down; kids are back to school routines; football games take over the TV (much to my chagrin – yes, I know many of you are HUGE football fans, but it just ain’t my thang); and most importantly, September is the one month the Krome Kitties invite their menfolk, friends and Kitty fans to join us on the Tom Kat ride.  September 2015 was no exception – destination for this year’s Tom Kat ride was Toronto, Kansas for dinner at Courtney’s Place.

The planning of the ride was much like the infamous Abbot and Costello “Who’s on First” routine.  In case you’re hot familiar with said routine, it’s a chaotic exchange of one explaining to the other the specifics of how to play baseball.  “Who’s on First” was our “Who’s Gonna Lead” and the beginning of our own Kitty chaos.  Christine Allsman and her Tom Kate, Dorrin, volunteered to take the lead, only to have to bow out due to Dorrin being called into work unexpectedly.  He would have to meet us in Toronto.  I, along with my Tom Kat, Greg, agreed to be the new lead riders, only after asking Greg a NUMBER of times, “Do you know how to get to Toronto?”  To which he replied a NUMBER of times, “Yeah, I’ve been there before and please don’t ask me again because my answer will be the same every single time.”  Nellie Taylor and her Tom Kat, JT, agreed to be the tail riders.  At the departure location, Greg stated to whiffle waffle a bit on his conviction that he absolutely knew how to get to Toronto and therefore, consulted with Tom Kat JT Taylor (Nellie’s husband.)  With each passing minute, Greg was feeling less and less confident so he implored JT to ride up front with us so he could check with him as we neared Toronto.  Wait…what?  What happened to “I know how to get there.  I don’t need to look at a map.  I know how to get there.  Don’t ask me again.  I’ve been there.  Yes, I’m sure I know how to get there.”  Where’s all the conviction I heard in your voice only 24 hours ago?  Nellie and JT agreed to ride right behind Greg and me, which left us without tail riders.  Sherri Hischke, Sueanne Rugh and her Tom Kat, LD, volunteered to be our new tail riders since Sherri and Sueanne had new bikes and they were still getting the feel of them.  OK, we finally got that settled so let’s bike up and roll out!  Wait…where’s Maureen Stout and her Tom Kat, Larri Brown?  Anyone seen Maureen?  Anyone heard from Maureen?  I shot a quick text to her and come to find out, her bike was down and out and they would also have to try to catch up or meet us there.  Unfortunately, Maureen had the 50/50 bag so there was no selling of tickets, which was probably good because I’m not sure I could have handled making change, counting out tickets, rearranging the order of riders, and begging Greg to look at a map all at the same time.

Finally, we were on our way, traveling on Highway 400 all the way to the turnoff which will take us to Toronto…so says Greg.  I have to say the ride was beautiful – the weather was cool, but not too cool; the sun was shining; and the scenery through the Flint Hills was breathtaking.  The mild summer we’ve had painted the scenery with vibrant colors and wildflowers were in bloom and abundant.  I’ve said it before and I’ll say it again…yeah, Kansas might not have mountain like Colorado or ocean views like our coastal states, but there’s something majestic about the flatlands and its native grasses and flowers.  I have to admit that the lyrics of America the Beautiful played in my head a number of times, especially the “spacious skies and amber waves of grain” part.  Sure, the “purple mountain majesties” has it beauty, but so does the “fruited plains.”

After about 70 some miles, I saw Greg’s left hand blinker go off and the lyrics popped out of my head and the thought of “OK, this must be the road to Toronto” popped in.  There we were riding in perfect formation, when all of a sudden I see a flash of red zoom right past me.  It was JT Taylor racing up to ride alongside Greg.  They exchanged a few words and then I saw it…the dreaded blinker to turn where there really wasn’t a place to turn.  That can only mean one thing; we’re gonna do a turnaround…on a rocky, gravelly turnout.  Excellent.  My very favorite kind of turn.  Since I was at the front of the pack, everyone got to witness my nearly perfect 10-minute execution of a U-turn.  Don’t be jealous ladies, we all can’t be as skilled as me!  After catching up with Greg and JT, we waited…and waited some more because evidently, I wasn’t the only one who had a difficult time getting her bike back on pavement heading the opposite direction.  We finally got everyone turned around and now JT Taylor was in the lead.  THANK YOU!!  Finally, someone who knew what he was doing and where he was going!  JT had already said we had missed a turn as soon as we left Highway 400, so when we backtracked, we made said turn.  We rode and rode and rode and then we came to a complete stop in the middle of the road.  I’m right behind JT and Greg and I’ll never forget the words that came out their mouths almost simultaneously…”We think we’re lost.”  I’ll also never forget the words that came out of my mouth, “The Kitties NEVER get lost when it’s just us. We invite the buys to ride and NOW we’re lost!”  I also looked at my bike clock and see it’s well past 5:00 and I had told the restaurant we would be there about 5:15.   Clearly, we’re going to be late.  While I was looking at my clock, about a dozen people behind me were pulling out phones and maps.  Well, to be honest, only one person had an honest to goodness, real life paper map and that was our very own, Be Prepared for Anything Kathryn Langrehr!  Kari Miller, aka GPS Kari Miller, had the route up on her phone and all the Kitties gathered around her and looked to her with desperation in our eyes to take over this ride.  Please Kari!  We don’t want to do another U-turn!  “Relenting to our begging, Kari agreed to take over the ride and the boys were put behind the girls as they hung their heads in shame.

Come to find out we were riding parallel to Highway 400 heading back west.  THANKFULLY, there was a turnout out to get back on Highway 400 so no more U-turns were necessary.  We’re now back on Highway 400 and I see Kari’s left hand blinker go on.  It was like déjà vu.  Wasn’t this the same road we took from Highway 400 before?  Huh…that’s interesting.  Then I see it.  I see the very same rocky, gravelly road that we all battled to make a U-turn on and this time, we flew right by it.  Do you mean to say we were on the right road all along?  Crap!  Does this mean I’m going to have to apologize to Greg and admit he was right??  Does this mean I’m going to have to hang all kinds of s#*t on JT Taylor??  Why yes, it certainly did because GPS Kari Miller led us right to the door of Courtney’s Place on the exact same road that Greg had us on to begin with.  Damn.  I hate being wrong.  And I hate having to admit it more than I hate being it.

So, by now it’s 5:45 and the ones we thought we would be waiting on were waiting on us!  Dorrin Allsman was lounging on his bike looking like he had been there for hours and Maureen Stout and her Tom Kat, Larri Brown, came strolling out of the restaurant with a beer in their hands.  Apparently, Maureen was trying to drown her shame for having to ride on the back of Larri’s bike as they never did get her bike up and running.

After giving everyone a brief rundown on how we found, or almost never found, the Ever Elusive Toronto, we all poured into Courtney’s Place.  This is when another déjà vu moment occurred.  It reminded me of the years when I was a teenager coming in late for curfew.  My mother would be standing at the door and only two words would be said.  “You’re late.”  That’s exactly how we were greeted by the maître d.  Just two words.  “You’re late.”  I started apologizing all over myself and explaining how we got lost and we’re so sorry and please forgive us and don’t turn us away, blah blah blah.  But in retrospect, I thought it was a pretty rude way to welcome us to the establishment that we were about to drop all kinds of money into.  However, it wasn’t long before we won over the perturbed maître d and I have to say the service from that point on was excellent.  The food…well, it was even more excellent!  We enjoyed a relaxing couple of hours visiting with each other and listening to live piano music in the background.  There was lots of laughter, particularly, when a reminder on my phone dated August 12, 2012 popped up that said, “Get a divorce.”  I spent the next few minutes trying to convince Greg that I honestly had no idea how that got there…but then again, it never hurts to have a reminder to evaluate the status of the ole’ marriage.  Am I right?

Then it came to time to pay the bill.  Remember how I emphasized that Courtney’s Place did not take credit cards?  Everyone was to be sure to bring cash?  Well guess who showed up with $34.00 to her name and whose Tom Kat had even less?  Yeah, that’s right…this girl!  Nellie Taylor and JT came to our rescue and loaned us the cash we needed, but really, that’s the least JT could do for the shenanigans he pulled out there on the highway.  Again…am I right?

By the time we left it was the dark of night and MUCH cooler.  We all leathered and layered up to prepare for the 1.5 hour trip home.  Everyone except Dana Branam, who despite having two perfectly capable saddle bags on her bike, brought zero extra clothing with her and was dressed in a short-sleeved shirt!  Kari Miller came to her rescue and loaned her a hoodie; however, it was later reported that that was one freezing cold ride for Dana!

So, there you have it!  This Tom Kat ride was a much smaller group than we normally have, but what we weren’t short on was fun, memories, laugher and re-enforcing once again why I love being with these ladies and having the rare opportunity to spend time with their Tom Kats.  On behalf of those who enjoyed this trip with me, I wholeheartedly recommend you pay Courtney’s Place a visit – you won’t regret it…just don’t ask JT Taylor how to get there and for God’s sakes…don’t be late!

A big thank you shout out to Maureen Stout and Melaina Phares for planning a fun-filled, first ever, evening ride!

Those who attended the Ever Elusive Toronto Tom Kat ride were Janice and Greg Friedman, Christine and Dorrin Allsman, Sueanne and LD Rugh, Maureen Stout and Larri Brown, Kathryn Langrehr, Nellie and JT Taylor, Kari and Daryl Miller, Sherri Hischke, and Dana Branam with her son Zack Branam and his girlfriend Alexandria (who by the way, thought these