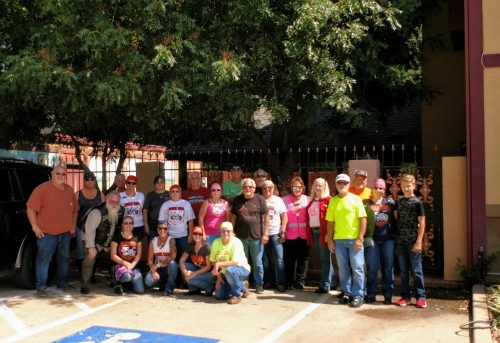 “P” may be for Ponca City, but for the September 16th Tom Kat ride, “P” was also for Perfect as we couldn’t have ordered up a more spectacular day for riding.  Clear skies, bright sunshine and not a breath of wind.  I would even go so far as to say that might have been the warmest Tom Kat ride we’ve ever had.  While most of us rode to the QuikTrip in Derby with jackets, they were quickly shed and we never saw them again.  Some of us packed our jackets in our saddle bags prior to leaving for the ride.  Not so with Nellie!  She took off her jacket and stowed it in between her bike and windshield…while riding to Ponca City!  That’s some skill right there!  That would have been a lost jacket if it were me.

When my Tom Kat, Greg, and I arrived at the QT at 8:30 on the dot, Kim and Kathryn were already there.  “How come you guys are here so early?” I asked.  Kim responded, “We had to stake out our No Tom Kat Zone.  Here’s the line (which she designated with her foot) and don’t you even think about crossing it if you got a man with you!” Duly noted Kim and Kathryn!

After making our greetings, getting beverages, breakfast burritos and donuts, I pulled out the flamed bag and starting pimping 50/50 tickets.  After witnessing my juggling struggle of tea, the bag, my phone, the tickets and money, Kathryn said, “You are bound to drop something, so why don’t you let me sell the tickets?”  I was happy to turn that over to Kathryn, who quickly enlisted the help of Annette, and I proceeded to snap picture after picture.  As I watched the time and took roll call, I noticed that a potential new member/guest rider and her Tom Kat, who I didn’t know and no one knew, weren’t there.  I checked every method for her to contact me and nope, not a word.  At this point, if she wasn’t on her way (in which case she wouldn’t see any messages from me), she wouldn’t make it on time.  I held a brief meeting to divide up the groups and announced that since the MIA rider was the reason we were stopping in Ark City for gas, we would no longer need to do that.  As we biked up to leave with Nellie’s Tom Kat, JT (who was caging it), in the lead of the first group and my Tom Kat, Greg, and I in the lead of the second group, I crossed my fingers that we weren’t leaving Mr. and Mrs. MIA behind.

After a quick gas stop, we pulled into the El Patio parking lot where the first group was lounging on a bench and curbs and chatting with one another.  Not one person seemed to be worried about what happened to us.  Clearly, I way overthink things.  No sooner had we pulled in the parking lot, along came Sherri and her friend, Cheryl.  Is it confusing to have a friend with almost the exact same name?  Sherri and Cheryl had ridden in from Oklahoma City and although they were in the same state, they actually rode further than we did!  And this is why we call Sherri “Hard Core!”

After digging out all the cash from the flamed bag, I turned it over to Bobbie to count and there was 110 smackeroos in there!  That meant that some lucky Kitty or Tom Kat was going home with 55 of them!  I gave David the honors of drawing the ticket.  Why David, you ask?  Well, even though his Kitty, Tricia, couldn’t attend the ride, David said he still wanted to go and he brought his friend Joe, too!  I figured any Tom Kat who attended the Tom Kat ride without being forced….uh, I mean, accompanied by a Kitty deserves some special recognition.  And apparently, he deserves being paid, too, because he drew his very own ticket!  David made me promise to not tell Tricia he won so I’m hoping by the time this is published, he has long spent the money and Tricia can’t confiscate it from him.  If not, well…my bad David!

And then it was time to reunite the pint-sized Tom Kats and I gotta say the Friedman Tom Kat is a little worse for wear compared to all the other still shiny, still got all their faces on, and still talking Tom Kats.  Thank you to Dorrin, Jim, and Al for taking such good care of your Toms!  JT, shame on you!  When I asked where his Tom Kat was, he said, “I don’t know.  The last time I saw him, he was in a storage compartment in the Slingshot.”  I asked, “You have no idea where he could be?”  To which JT replied, “Probably still in the Slingshot…which has been sold…to a stranger.”  Oh, the horror!  We did a photo shoot with the little guys and they said their good-byes for another year.  I hope the Friedman Tom Kat still has a face by then.

When I got on my bike and turned the ignition switch, all I got was a whole lot of nothing.  I did it again…and again…and again with the same result.  The assumption was I had a dead battery, but no worries – I’ve got tools and jumper cables and plenty of bikes to get me jumped.  I told everyone to go ahead and leave and Greg and I would ride back with David and his friend, Joe, who were in the meantime, helping Greg get my bike seat off and getting tools out.  As I was telling Christine what happened, she said, “You know it’s the strangest thing, when I went to turn my ignition switch, it had been flipped to the accessory setting, which I would never do.  Someone must have messed with it.”  Who would be brave enough to mess with a bike when it’s accompanied by two dozen other bikes and they don’t know that we’re not the Sons of Anarchy?  That’s just crazy!

So, there you have it!  Another fun, gorgeous day on the bikes with our husbands, boyfriends, friends and family on the annual Tom Kat ride.  Thank you to all those who made the day so memorable and enjoyable!   And thank you to the ride leaders, Greg and JT, and to the ride sweeps, Nellie, Al and Dorrin for getting us there safely and without one missed turn.

Those on board for the South of the Border Tom Kat ride were Janice and Greg, Nellie and JT, Tresny and John, Christine and Dorrin with Zach, Linda and Jim, Kari and Daryl, Bobbie and Al, Sherrie and Cheryl, Kathryn, Kim, Chris, Annette, David and Joe.