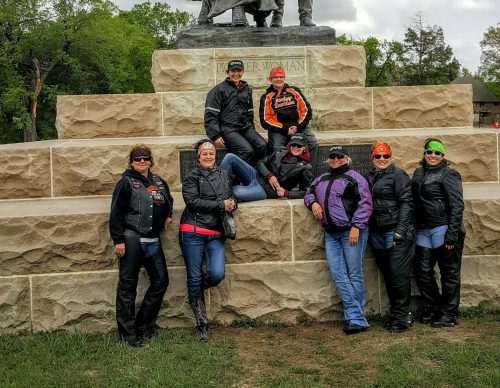 Indecison.  Nine times out of ten, that’s how all the April rides start – do we go or do we stay?  Keeping with tradition, this April ride was no different.  Suz and I traded texts all week leading up to the Saturday, April 16th ride day.  We scrutinized the weather forecast multiple times a day and each time the chance of rain dropped be even 1%, we would shoot off another text and say, “Did you see the rain forecast is now only 59% instead of 60%?!”  Knowing it would be a game day decision, I went to bed on Friday night and just hoped for the best.  What I woke up to on Saturday morning definitely wasn’t the “best” but it was dry and the radar that Suz and I had become best friends with said, “Damn girls, you’re driving me crazy this week!  If you want to go so bad, then just get the heck out of here and I’ll hold off dumping water until after you get back.”  Knowing Mr. Radar could be pranking us, I posted on Facebook to pack rain suits, but we got a break and we’re taking it!  So, ten Kitties rolled into the Derby Quik Trip parking lot, all leathered up and ready to ride.  Well, nearly everyone.  One Kitty rolled in all canvassed up and ready to ride.  Maureen thought “dress warm” meant a canvas jacket with a long-sleeved shirt or two underneath.  It only took the ride to Derby to realize the error her ways and announced leather doesn’t always have to mean leather.  “Did you know you can make your own leather by putting a nylon rain jacket over top of a canvas jacket?”  That Maureen – always a rebel!

After saying our hellos, exchanging hugs, welcoming new member Shelley to the group, selling 50/50 tickets and gassing up, we rolled out of the QT parking lot with Linda in the lead and Nellie and her Batmobile bringing up the rear.  Next stop – Ponca City, USA!

The ride to Ponca City was uneventful and by eventful, I mean we didn’t get rained on.  Sure, there were a few drizzles that had us all holding our breath that it wasn’t the start of a bad thing, but Mr. Radar held true to his word and Linda led 10 dry and happy, albeit windblown, Kitties right to the parking lot of Enrique’s Mexican Restaurant.

After getting to know Suz’s family; enjoying some pillow chips and salsa; chowing on some darn good Mexican food; and thoroughly discussing the merits of fried pie, it was time to finally give yours truly the 50/50 proceeds.  I mean, at some point odds are I gotta win, right?  Well, no I sure don’t gotta!  Cousin Kimmie did the honors (or dishonor if you’re a loser like me) and pulled the winning ticket for the $25.00 which happened to be in Rebel Maureen’s hot little paws.  Damn!  Robbed again!  Someday Little Orange and Black Flame Bag, you’ll be mine…all mine I say!

Not wanting to push our luck by overstaying our welcome in Ponca City and risking Mr. Radar turning on the faucet, we decided to forego the Marland Mansion tour.  Instead Huge Steve and Cousin Kimmie (who rides a big ole Harley because after all, you can’t put Huge Steve on a small ole Harley) offered to lead us to a few points of interest in Ponca City.  By now, we had lost Kathryn and Shelley who had opted to leave from the restaurant to head back home.  So, eight Kitties rode to the first sightseeing stop on the tour, which was the Pioneer Woman monument.  This is a bronze sculpture donated to Ponca City by none other than E.W. Marland (original owner of the Marland Mansion) in 1930.  It was to honor the heroic character of the women who braved the dangers and endured the hardships typical of the daily lives of the pioneers in this country.  (Given this criterion, don’t you think there should be a Krome Kitty monument?  After all, we brave danger and endure hardships all the time.)  It was very awe inspiring, but what we really saw was PHOTO OP!  The statue is erected on a pyramid of stones which E.W. Marland thoughtlessly failed to provide steps to.  I mean how is one to get up to the first level without steps?  I’ll tell you how, you belly flop your way up, that’s how!  With a not so gentle butt push from a sister Kitty, I managed to roll myself up to the top level.  I then look up from my prone position to see Linda and Maureen already there, standing upright.  Those aren’t Krome Kitties, those are Mountain Lions with all their nimbleness and sprightliness!

After making a drive-by the Marland Mansion and wishing the weather would have been more cooperative and vowing to take another go at it in the future, we rode the short distance to Standing Bear Park where there is a 22-foot bronze statue erected in honor of Standing Bear, a Ponca Native American Chief.  Again, what we saw in addition to something actually taller than Huge Steve was PHOTO OP!  Sue and Sueanne opted to keep Huge Steve and Cousin Kimmie company at the bikes, while the other six Kitties hiked our way through the park to the monument.  We snapped lots of pictures, Suz took a refreshment break and then it was time to go find that infamous fried pie that Sueanne raved about during the entire lunch.  Huge Steve offered to lead us to pie nirvana, which he thought was about 15 miles away.  Soon we were pulling into a gas station along Interstate 35 and I thought, “This is where the fried pie is?”  Turns out it is where Huge Steve THOUGHT it was, but after consulting with Know It All Google, we discovered it was another 5 or 6 miles away.  Again, not wanting push our luck, we gassed up and decided to let the south winds push us back to Wichita.  We said our good-byes to Huge Steve and Cousin Kimmie and as we were pulling away, they called, “Y’all come back now, ya hear?”  To which we replied, “You bet your sweet fried pie we will!”  A colossal thank you to Huge Steve and Cousin Kimmie for being our welcoming committee, our tour guide and our new friends in Ponca City!  You guys are the best!

So, that’s how we spent the day that almost never happened puttering around Ponca City.  It was a great way to start Season #12 and a big ole’ Kitty Kiss goes to Suz and Denise for planning a fun-filled day for us!  Those on board for the “Putteirng Around Ponca City” trip was Janice, Suz, Kathryn, Shelley, Sue, Sueanne, Maureen, Christine, Nellie and Linda.