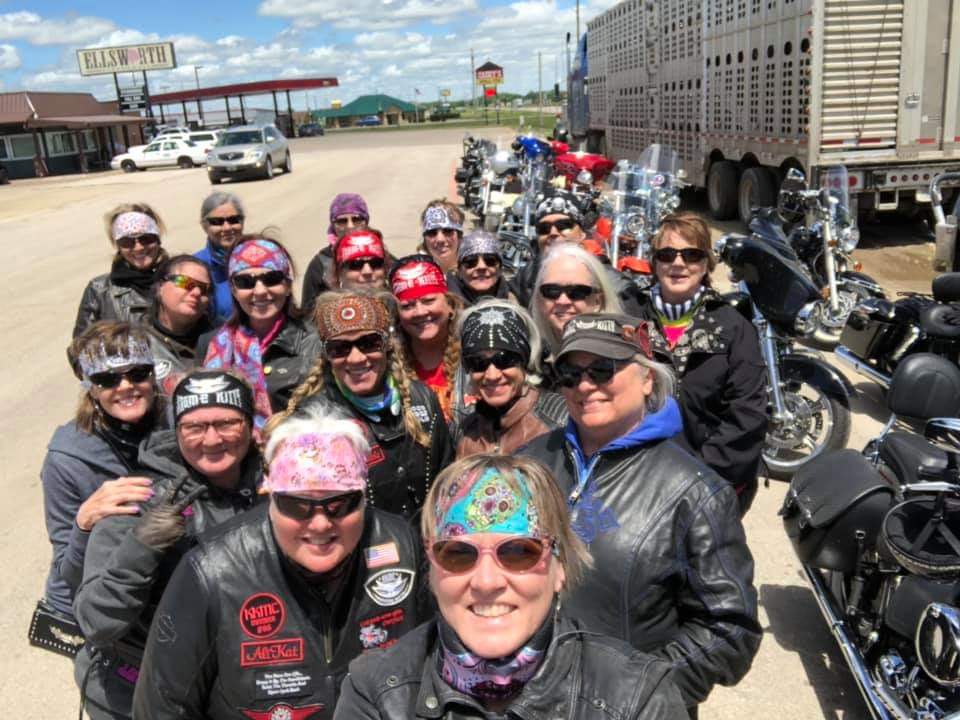 Mactober.  Sometimes you have to make up your own word to describe a situation and Sunday, May 19th, was just such a time.  The calendar said it was May and well past the first day of spring.  The reality was that it felt more like a cool fall day in October.  So henceforth, this ride will be known as the Mactober Road Trip.

Funny thing is when I was riding from my house to the meeting location in Park City, I distinctly remember thinking, “This isn’t so bad.  Give the day another hour or two to warm up even more and it’s going to be a very pleasant ride to Ellsworth.”  I couldn’t have been more wrong.  It was bad…really bad.  But I’m getting ahead of myself; let’s start at the beginning.

The first thing that probably struck the Kitties as they poured into the QuikTrip parking lot that morning was, “Is this a Tom Kat ride and no one told me?  What’s with all the dudes??” This would have been a natural assumption since four Kitties, Suz Tiede, Nellie Taylor, Alice Friedman and myself, were accompanied by our Tom Kats.  No, it wasn’t a Tom Kat Ride and none of us needed escorted to the QuikTrip, but when Lori Gibbs reached out to my husband, Greg, to ask about a problem she was having with her saddle bag installation, he agreed to meet her the morning of the Mactober ride to fix it.  Well, apparently it took four men to figure it out – and figure it out, they did not.  Turns out there is some part that needs customized; I don’t know, it all sounded like blah, blah, blah to me, but they assured Lori that her bike would be fine to ride to Ellsworth.  Lori took a huge leap of faith and thought, surely four men can’t be wrong.  Really??  I think four men can be wrong all day long!  Since these four Non-Professional Saddle Bag Installers were all together, they thought they might as well go on their own ride to Beaumont following the failed saddle bag installation repair.  Yeah, maybe there’s someone in Beaumont who needs a repair on their bike that you can’t do for them!

As usual, there was plenty of business to conduct in the QuikTrip parking lot.  Suz Tiede took control of pimping 50/50 tickets; Alice Friedman passed out 15th Anniversary shirts; and I delivered patches.  There was so much money being exchanged that to the average onlooker, it looked like Drug-a-Palooza day in Park City.  After conducting a brief meeting to announce Lead Riders and Sweep Riders and go over the route, which had multiple turns that I was thankful I didn’t have to remember, we were ready to mount up.  Ellsworth, here we come!

And this is when it all started to go bad.  The further north we went, the colder it got.  I thought to myself, is it possible that the temperature is actually dropping?  Silly me…of course it’s possible.  It’s Kansas!  Because that ride from home had been fine, I didn’t put anything on my face, or even bring anything to put on my face, so said face was frozen.  I had on my winter gloves, but I had lost all feeling in my fingertips.  Now we all are fully aware of my inability to tolerate cold, so I thought maybe it’s just me.  Everyone else is probably fine.  For SURE, Jan Brock is fine!  Seriously, is she even human??  This is where I was wrong for the second time that day; everyone was NOT fine!  Fortunately, we had worked in a gas stop in Lindsborg and at the pre-ride meeting, I had said, “It will be a quick stop.  Only one person needs to get gas, so everyone just stay on your bikes and we will leave immediately after Sherita LaCoss gasses up.”  This is when I was wrong for the THIRD time that day.  We needed to stop and we needed to stay stopped for awhile!  We were ALL frozen…well, except for the one aforementioned non-human.  However, no one was more frozen than Kristi Evans, who took the weather forecast of 75 degrees seriously and came with only a jacket on and NO GLOVES!  To this day, I don’t know how she did it.  As cold as my hands were and she did it with absolutely nothing to cover hers?!  There’s got to be a Road Name in there somewhere for surviving that.  Some kind Kitty loaned her a spare pair of gloves for the remainder of the trip and I stole a bandana right off of Suz Tiede’s neck to cover my face.  Hey, a girl’s gotta do what a girl’s gotta do!  After readjusting our clothing choices and warming up SLIGHTLY, we were back on the road for the remainder of the trip, which thankfully, was not as far as the first leg.

I have to stop here for a minute and give special recognition to Suz Tiede and Christine Allsman for their outstanding Lead Rider skills.  Somehow, they managed to remember all those turns that Kathryn Langrehr had talked about at the pre-ride meeting and didn’t miss a single one.  We pulled right into the Ellsworth Steakhouse parking lot and took special care to not take up all the parking spots by parking waaaay at the very edge. The only thing separating us from the street was a long patch of mud and some grass.  Well done ladies!  I also want to thank Tresny Janzen and Kathryn Langrehr for donning the yellow vests and providing excellent Sweep duty.

After dismounting from our bikes, we all started gathering things we needed from our saddle bags and after I pulled out the big ole Kitty bag that accompanies me everywhere I go, I turn around and run right smack into Kate Spade.  A pink Kate Spade.  A pink Kate Spade purse being carried by Maureen Stout! Now I ask you? Who in God’s green earth brings a pink Kate Spade purse on a motorcycle ride??  Oh yeah, the same person who brings a SKIRT on an overnight Kitty trip, that’s who!  And don’t think for one minute I didn’t notice how perfectly matched the Kate Spade was to your head scarf!  That’s our Maureen, always dressing to impress!

We all filed into the restaurant where they had all the tables set-up and waiting for us.  The only thing I could think of us, “Must have hot tea.”  Apparently, that was the thought for several of us as hot mug after hot mug was delivered to the Popsicle Kitties.  You know what happens when 18 Kitties all have the same idea to partake in the fried chicken buffet?  It quickly gets wiped out.  I have to give props to the restaurant staff, though, as they quickly recovered from the ravenous felines and replenished food as swiftly as possible.

While some were finishing up eating, Suz Tiede and I had the chance to properly make fun of Lori Gibbs for going old school and wearing a dickie.  For you young ‘uns who have never heard of a dickie, this is what we used to wear back in the day under a sweater that mimicked the look of an undershirt or turtleneck, but all it really was was the neck part.  That way you didn’t get hot by wearing two shirts, but could still look fashionably cool.  Truth be told, I would have paid good money for that dickie.  Maybe I should have stolen that off of Lori rather than the bandana off Suz.  I’ll have to start scouting out my options before pilfering stuff.

After filling our bellies, it was time to find out who was going to be the winner of the 50/50 pot.  Suz Tiede reported that there was $48.00 up for grabs and as the winner of the last 50/50 pot at the May Meow Mixer, I gave Sherita LaCoss the honors of pulling the ticket.  As she was reaching her hand into the flamed bag, I said, “Just so you know (or as Kathryn Langrehr would say, JSYK), if you win two times in a row, you are banished from the Club.”  I’m sorry to say, Sherita is no longer with us.  OK, that’s not true, but dang if that girl didn’t win AGAIN!!  She reported that her lucky number is 8 and both the ticket at the May Meow Mixer and this ticket both contained 8’s.  Ok, we have no choice but to give her the Road Name of “Eight Ball.”  Congratulations Sherita!

After discussing the options for how to go back, it was decided that some would go the Speedy Gonzalez route via I70 and Highway 135 and some would go the scenic route under Kathryn Langrehr’s leadership, which again I have a snowball’s chance in hell of remembering.  Seriously Kathryn, have you been on literally EVERY road in the state of Kansas??

After settling up our tabs, we all walked outside and what in tarnation??  There, wedged in between our long line of bikes and the edge of the parking lot, were two big ole cattle trucks!   Talk about threading a needle!  That’s what those drivers had to do to get their trucks in such a tight space without tipping over bikes which would have gone down like dominoes.  I wasn’t sure if I should be impressed or annoyed; I chose to go with impressed because that was some skilled driving right there!

Suz Tiede pulled out her trusty selfie stick and we got a great group photo.  I have to say, after 14 seasons, we are mastering this group photo thing!  Everyone is present and accounted for; everyone is looking at the camera; everyone looks pretty; one Kitty is showing off with a Kate Spade purse; and we usually get a good shot on the first try, which is huge departure from year’s past.  Keep up the good work Kitties!

After replenishing our gas tanks, we were ready to gut out the cold ride home.  And just like the trip to Ellsworth got colder the further north we went, the trip home got warmer the further south we went.  Was it balmy, late spring weather?  No.  But, was it tolerable?  Yes, if you had on five layers, which I did.  When I pulled into my driveway, Greg came walking out of the house.  I looked at him and said, “That was one of the coldest rides I’ve ever been on.”  His response…”Really?”  Our ride to Beaumont was very pleasant.  I never got cold.”  Shut up Greg.