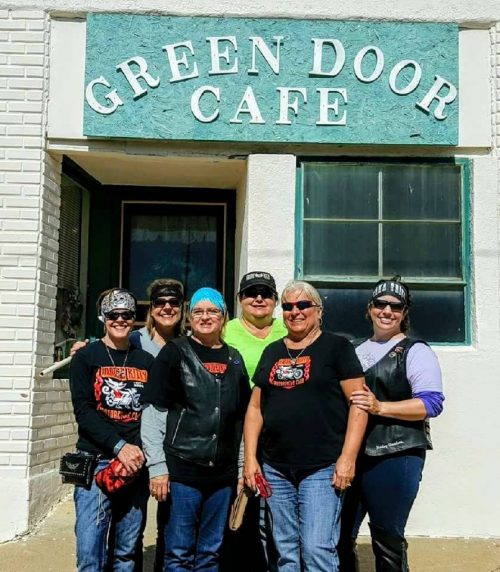 Sometimes you just get lucky…and not in the way you’re thinking Maureen!  The kind of lucky I’m talking about is when you have a motorcycle ride scheduled for October 11th and you brace yourself for what you know will be a cool, potentially downright cold, day.  And yet the Weather Gods decided that after what it threw at the Krome Kitties on our first ride of the season with what can only be described as a temper tantrum with all the wind, rain and hail, they would cut us a break and allow us to enjoy our last ride of the season with one helluva fantastic day!  Yes, this October day dawned with abundant sunshine and with promises that it would warm up to a toasty 86 degrees!  And while weather can change in an instant in Kansas, this time those forecast promises were kept!

The original group was small – 11 Kitties signed up to make the trip to Sedan, Kansas to eat at the Green Door Café.  Sadly, the group got even smaller.  After several Kitties had to cancel at the last minute, we ended up with only six Kitties who made the trip.  As we all gathered together at the QT in Derby, we had one thing on our minds…what the heck is Nellie driving??  This head-turning machine was somewhere between a three-wheeled motorcycle and something you might see roaming around on the surface of the moon!  We got the scoop on the what, why, when, and where from Nellie and then got a tour of everything this moon machine had.  All I gotta say is as we made our way to Sedan, five other motorcycles weren’t even noticed – this Red Slingshot got all the attention!

Kathryn, who mysteriously seems to know every back road in the state of Kansas, had volunteered to lead us to Sedan.  Unfortunately, Grandma duty came a calling and she was unable to make the trip, but did take the time to give us the route in step by step detail.  GPS Kari and Christine agreed to take over the lead and did we care if we had to stop a time or two to let them review the route?  Heck! No!  Did I mention the day was spectacular??  Kathryn’s route treated us to some beautiful Kansas scenery and some super fun curves, which she had pre-warmed, “Take them at the speed limit!”  We heeded her advice and were thankful for it as my little Harley bell went tinkle, tinkle, tinkle several times as it brushed across the pavement.  These were almost Arkansas worthy curves!

With one short stop en route at a gas station to shed a few layers, we arrived at the Green Door Café about 20 minutes late for our reservations.  However, unlike the reception we got at the restaurant in September, they didn’t care one iota that we were late.  They were thrilled the Krome Kitties had come to visit and eat some good old-fashioned fried chicken!  They tucked us into a quiet little corner (probably not so much for our benefit, but for the benefit of their other guests – the Kitties can get pretty rowdy, ya know!) and the most unique and wonderful thing about this restaurant is they served the dessert first!  Brilliant!  Not to mention any names, Melaina (did I just say that out loud?), but some of us chose to just go ahead and eat that dessert before the meal was even served!  And yes, there was the occasional patron who stopped by to say, “Who rides that red thing out there?” and five Kitties would point their little paws in the direction of Nellie, who was as proud as a mother cat with her litter of kittens!

After filling our tummies with some wonderful chicken and mashed potatoes and taking the required selfie, it was time to draw the winning ticket for the 50/50 raffle.  So, let’s set the stage…there were six Kitties in the mix, five of whom had never won before – including yours truly.  The five of us who had never won considered thems some pretty good odds that a non-winner was finally going to come away with some moolah.  With fingers crossed, we gave the owner of the restaurant the honors of drawing the ticket and wouldn’t you, the one person in the group who had won before won again!!  Damn you Christine for taking my $15.00!

After shaking our heads in disbelief over our luck (or lack thereof), we filed outside and asked the owner to join us to take our group picture.  After filling up our bike tanks, we made the non-stop journey home via a different route which quite honestly, I hardly remember because I was just so glad to be on my bike, with my girls, on an extraordinary Fall day! (OK, I have officially run out of adjectives to describe how outstanding this day was …oops, there’s another one!)

So, that’s a rap!  The season is over and it was a great one!  We got hailed on; we overnighted, we got lost; we got scolded for being late; we got rained out.  But most importantly, we had fun and adventure and we made memories!  A HUGE Kitty THANK YOU to Maureen and Melaina for planning a great season for us!  You rocked it girls!

Those on board for the “Indian Summer for Sedan” ride was Janice, Kari, Christine, Nellie, Linda, and Melaina.