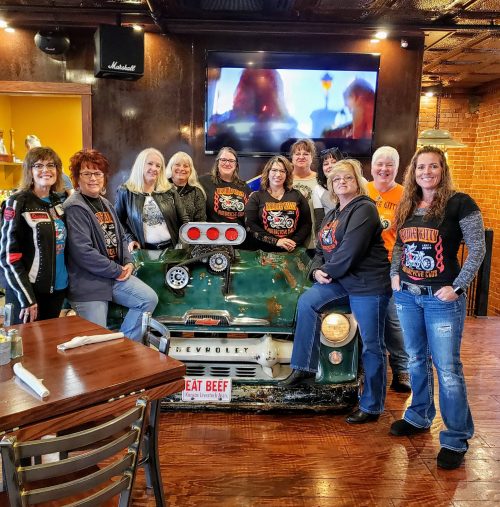 Nailed it!  That’s right my Feline Friends, although you never really quite know if the decision you make several days prior to a Kitty ride is the right one, we nailed this one!

When the October 14th Road Trip was in the early planning stages, it called for seasonably warm temperatures and clear skies.  With each passing day, the seasonably warm temperatures became unseasonably cold temperatures and Mother Nature also decided to throw in a strong chance of rain.  Several days before, I reached out to Kathryn and Suz and said we gotta pull the trigger.  Either we cancel altogether or we caravan by car.  Both Kathryn and Suz agreed a little bit of cold and a whole lotta rain shouldn’t stop us from still getting together.  OK, let’s end this season the same way we started it – caravan it is!  Then I spent the next several days waffling between hoping the weather would improve so we could ride and hoping it wouldn’t so we wouldn’t have to change the plans at the last minute – and I could say we were right.  Bragging rights are very important.

Well, I bragged all over myself when I woke up that Saturday morning and it was raining and it didn’t look like the kind of rain that was leaving anytime soon.  That was the first time I said, “Man, we sure got that right.”  There were many other times I said that as it never stopped raining the entire time we were gone.  Not once.  And as a matter of fact, it got colder and it rained harder as we travelled back home that day.  Did I mention that we sure got that right?!

Alice picked me up and when we arrived at the QT meetin’ spot, Kitties were hunkered down in their assigned cars taking shelter from the rain.  Soon after, Susan arrived and after checking with my soaking wet, nearly falling to pieces, roll call sheet, that meant everyone was present and accounted for.  While we were leaving earlier than expected (because ain’t nobody going to stand around and chat in those conditions), we hit the road for Winfield USA.

Upon arriving in Winfield, we hooked up with Bobbie and Dawn who rode directly to Winfield, and there was Dawn taking pictures of some sculptures outside the restaurant…in the rain.  Trust Dawn to flip her nose at the weather and not care one wit about how wet she was getting to get the perfect pictures.  The rest of us…well, we beelined it for the door and yelled “Hi Dawn” as we ran by.

Once inside, we welcomed and introduced ourselves to Kathryn’s guest, Cindy.  When Kathryn told me days prior that she was bringing a guest, I assumed this was a long-time friend of hers.  Well, you know what happens when you “assume” something – it makes an ass out of you and me….but this time, just me.  Turns out Kathryn had just met Cindy….at Home Depot….yep, total stranger….who Kathryn’s tag-along friend introduced her to….at Home Depot.  Talk about risky business!  Cindy could have been an ax murderer or a Kitty snatcher!  However, turns out Cindy was just a sweet gal out buying padlocks….at Home Depot….to prevent her no-good, cheatin’ husband from getting his stuff out of the shed, garage and house.  After hearing the story about Cindy’s husband and what he did to sweet Cindy, he shouldn’t just be locked out, he should be locked up!  Some men just gotta be scoundrels!  Kathryn’s good vibes about Cindy were spot on and she fit right in like she had been a part of our gang for years.  Rumor has it that she ”just might have to” join the Kitties!

The restaurant, Shindigs, sat our group of 11 upstairs where there wasn’t another soul in sight.  Silly Shindigs!  That’s just begging us to be loud and boisterous!  Well, you asked for it and we’re going to give it to you…and then some! We talked, we laughed, we shared, we emphasized and we made a cold, wet day that could have been spent closed up in our homes, a beautiful day making memories with friends.  And we did it loudly!

For one lucky Kitty, it was a day for making money!  After counting out the cold, hard cash in the flamed bag, it looked like we had $25.00 up for grabs….well, up for grabs if you got the winning ticket!  And that fortunate Kitty was none other than Kathryn!  My guess is Kathryn will be spending that money on a rock, or a bush, or a toilet or some other necessity for the home she’s building…with her own two hands.  I’m not kidding.  The woman is like Wonder Woman with all that she can do on her own.  When I die, I wanna come back as Kathryn.

After grabbing one of the wait staff to snap a group photo, it was time to make one last potty stop and reconvene into our assigned cars for the trip back to Wichita.  By the way, this has to go on record of the fewest pictures ever taken on a Kitty Road Trip.  I’m sure Dawn is happy about not having to find space for my customary 156 pictures in the newsletter.  You’re welcome!

That’s a wrap and drop the mic!  We had a great season of rides and comradery; we added eight, yes I said EIGHT, new Kitties (Kim, Lily and Lori [returning Kitties which confirms that Once a Kitty Always a Kitty!], Krista, Deborah, Stephanie, Tresny and Susan); we demonstrated our talents and proved Kitties Rock by painting rocks; we boo’d and hissed at the Mosley Street Melodrama; we filled Easter buckets for the children residing at the WFCC; we patched ourselves up with Road Names; we got buttoned up with International Female Ride Day buttons; we posed like Supermodels in photo shoots [thank you again Gary and Alice!); we traveled around the world on our Meow Mixers; we showed our patriotic spirt and rode in the Shortest Parade in Wichita; we collected badly needed items for the WFCC and treated the residents to fun, games and ice cream; we caravanned our way through rain to Buhler, KS in April; we tu-tued our way to Abilene, KS in May [and wished we had caravanned – it was cold and wet!]; we visited the underground in Ellinwood in June; we nearly melted going to Bartlesville, OK and Tahlequah, OK for our Annual Overnighter in July; we got free bandanas [we love free anything!] in Wynona, OK in August; we Tom-Katted our way to Ponca City, OK in September; and we made the best of a bad weather situation by driving to Winfield, KS in October.  A great big HUGE thank you to each and every one of the Kitties for making our 14th riding season one to remember.  A MASSIVE thank you to Suz and Kathryn for finding us fun and interesting places to go to this season and to Dawn and Alice for taking us around the world with international cuisine Meow Mixers, organizing the charity events and planning fun Winter Events!  The Kitties rock in so many ways, but the friendships we’ve made and strengthened has to be at the top of that list.  Winter activities will be announced soon so make time to stay connected and until we ride again in April 2019, keep the shiny side up!

Those on board for the “Four Wheeling to Winfield” Road Trip were Queenie, Tink, Lady, BatKat, da Vinci; Glitter, Ice, AliKat, BadA$$, Susan and Guest Cindy.