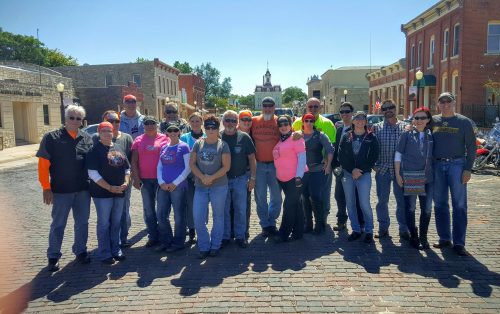 (Insert the Misadventures of Moline first paragraph here.)  Literally, the exact same Friday night downpour as what we had before the Moline ride repeated itself the Friday night before the Cottonwood Falls trip, only worse.  This time there was major flooding all over the city, but the skies cleared up and dried up just in time to bike up the next morning.  And like the Moline ride, it was a double jacketed kind of morning with much cooler temperatures than the days leading up to the ride.

Nineteen bikes and a Slingshot poured into the Quik Trip on Saturday, September 10th, and I just want to say thank you.  Thank you for recognizing that it’s high time the Kitties come bearing gifts for me and my Tom Kat, Greg, when arriving for a ride.  I mean isn’t that what dignitaries do when they come to the United States to visit the President?  Isn’t that what the Three Wise Men did when they visited the Baby Jesus?  OK sure, maybe I’m not as important as the President of the United State or Baby Jesus, but let’s just all agree to keep up with this tradition, shall we?  So, what did we receive at the September gathering, you ask?  Well, Colleen Williams presented me with a brand spanking new white leather Harley Davidson coat!  Clearly, this was purchased especially for me because a) it still had the tags on it; b) it was my size and fit perfectly, and c) it matches my black and white bike to a tee. Colleen, your gift was AWESOME and all I gotta say is you girls have a mighty high bar to reach for future gifts!  No sooner had I finished oohing and ahhing over my wonderful coat, when Melaina Phares fulfilled her duties and presented my Tom Kat, Greg, with a wonderful denim Harley Davidson jacket!  My very own Daddy Long Legs has Daddy Long Arms, too, and rarely finds shirts or jackets to fit, so the fact that this fit him perfectly shows that Melaina put a great deal of effort into her gift.  Now some naysayers might try to tell you that Colleen gave me the coat because she felt it would be a betrayal to her beloved Indian to wear competitor’s clothes and that Melaina had had this denim jacket in her basement for years and was looking to pass it on to someone else, but don’t believe them!!  They’re being Negative Nellies (not you Nellie Taylor, you’re not negative, you’re wonderful, I love you, bring me a gift in October), and are just trying to get out of bestowing gifts upon me.  So follow your conscious and do the right thing.  I wear a medium.

OK, back to less important matters – like the ride…..

We split the group into two with Greg and I leading one group (in our beautiful new coats) and Christine Allsman and her Tom Kat, Dorrin, leading the second, while Nellie Taylor and her Tom Kat, JT, and Suz Tiede and her Tom Kat, Jim, rode in the sweep positions.  All the rain we’ve had this summer made for absolutely beautiful fields of green dotted with thousands of wild sunflowers.  Seriously, these were so abundant that the state of Kansas really should consider making sunflowers the state flower.  I think I’ll mention that to the State Flower Supervisor.  Maybe they could even put that on license plates – something like…Kansas, the Sunflower State.  I’m so smart.

We arrived in Cottonwood Falls without incident, but turns out Greg and I didn’t really know how to get to the restaurant, so Maureen Stout who happens to know the town of Cottonwood Falls like the back of her hand, took over the lead and drove us right to the Grand Central Hotel, with just one tiny little U-turn to get on the right side of the street to park.  The restaurant had our tables all set up, complete with personalized Krome Kitty menus, but the day was so beautiful and what do we have here?  Outdoor  dining tables!  We all picked up our place settings and moved the party out to the warm, fall-like sunshine.  I think I did hear a patron or two mutter under their breath, “Thank God!  Them Hells Angels look unruly and loud so put those Alley Kats outside!”

While some of us had their food and some of us were waiting for food, each of the Kitties introduced their Tom Kats and guests, which included two handsome men, Mike Hermann (Christine Allsman’s brother and long-time Tom Kat rider) and his friend, Paul Lisa.  We also welcomed Emma Stout, Maureen Stout’s daughter, who is a real life, bonafide Cowgirl and lives in Bizarre just down the road a piece.  (Emma, did I say that right?  Isn’t that how Cowboys and Cowgirls talk?)  We learned that Maureen had high hopes of Emma finding some rich rancher to hitch her daughter to, only to find out that she much preferred her fellow ranch hands for friends and a sweetie.  We also welcomed newish Kitty Alice Friedman and her Tom Kat, Gary, who is my husband’s brother and according to Gary, the Better Friedman.

And then the long awaited moment arrived.  Who was going to win the 50/50 pot, which on a Tom Kat ride is pretty darn sizable – $50.00 sizable to be exact!  Suz Tiede mixed up the tickets and gave Emma Stout the honors of drawing the winning ticket, which belonged to….. drumroll please…….CHRISTINE ALLSMAN (or Dorrin Allsman but that also means Christine Allsman.)  Normally, this is where I would bitch and moan about once again being cheated out of winning and how this is the SECOND time Christine has won, but I’ve decided in light of the new tradition of showering me with gifts, I will refrain from my usual rant.  Congratulations Christine (and Dorrin who will never see a dime of this money!)

And then there were MORE presents – a little gift for each and every one of the Tom Kats!  Bobbie Cole had eaten 13 McDonald’s Happy Meals just to get the Talking Tom Kat toy inside each meal.  Bobbie, you are to be commended for the sacrifices you made for these absolutely adorable and perfect gifts!  She had gift bagged each one and as she passed them out, I said a few words to let our Tom Kats know how much we appreciate all their support; being understanding when their Kitty says they’ll be home around 2:00 and it ends up being 6:00 (insert a big hurrah from Dorrin Allsman here – something about that not being a bad thing); and giving us their muscle when we really needed them to (no, Maureen, not THAT kind of muscle you naughty Kitty!)  We all had fun listening to what each little plastic Tom Kat had to say such as “My name is Tom and I’m a Superstar”; “Ooooh, do want to be my friend?”; “You and me should go on an adventure”; “Let’s go have some fun”; “C’mon, high paw!”; and “I’m a Tom Kat, show me your boobies.”  Wait what??  Sounds like a perverted Tom Kat slipped by internal controls!  I then made the declaration that in order to attend next year’s Tom Kat ride, those who received these adorable little Toms must present their little guy as an entrance fee.  We’ll see how many were paying attention; how many end up giving them to their kids or grandkids to play with; or how many “accidentally” lost them on the way home.  Thank you, Bobbie, for finding such a fun and clever way to honor our guys!

Next came time for the photo shoot.  I had this brilliant idea of getting all the Kitty’s bikes to the town’s beautiful and historical courthouse just down the street and positioning them so that all the Kitties could be photographed from the front and back.  For the most part, the Tom Kats did the jostling of bikes and Nellie Taylor backed in and backed out, drove in and drove out to get her Slingshot in just the right position. After all the positioning and poising, the best shot of the day ended up being a spontaneous picture taken by Gary Friedman of Kitties in full on laughter mode.  That picture is a true depiction of the fun, fellowship and feistiness we have with our feline friends!  Try saying THAT 10 times!

We then gathered everyone together for one last group shot courtesy of Chinese Cowboy Jesus Chris (Suz’s words not mine!) and given that there were Sedgwick County Fairs to visit, movies to go to, family dinners to attend and naps to take, we decided to call it a day; although Maureen Stout and her Tom Kat, Larri Brown, talked of doing a little Cottonwood Falls shopping (I think it was more Maureen talking and Larri rolling his eyes and sighing heavily.)  In typical herding kats fashion, everyone scattered in different directions and what started out as two groups coming to Cottonwood Falls ended up being about six groups leaving Cottonwood Falls.  But everyone got home safely with traveling buddies and it couldn’t have been a more purrfect September day for a ride.  The 12th Annual Tom Kat ride is in the books and thank you to all of those who attended for making it such a fun day!