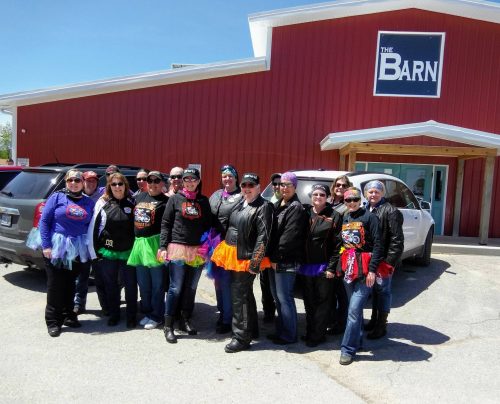 What a pleasant departure for an April ride.  Normally, the days leading up to an April ride are filled with indecision and stress.  There are usually dozens of emails shared between myself and the Excursion Kitties scrutinizing every change in the weather forecast.  Plans A, B and C are devised in the event the 50% chance of rain turns into 80% chance of rain.  Well, not THIS April my Feline Friends!  While the day before the ride to Burrton was very cloudy and cool, Sunday, April 23rd, dawned with abundant sunshine and no wind!  Let me repeat that.  NO. WIND!  So, although the temperature was only in the high 40’s by the time we all were leaving our homes, the sunshine and NO WIND made it feel warmer.  Well, for everyone except Sherri Carver who left her house HOURS before the rest of us, but more on that later.

As I pulled off Highway 96 to find the Kwik Shop, the first thing I noticed was a Quik Trip.  What the heck?  When did they put that there?  I swear – Quik Trip has planted their stores all over the city and having planted this one right where I said we would be meeting at a Kwik Shop could pose a problem.  And sure nuff, a couple of Kitties had pulled in the Quik Trip and were waiting for the rest of the Kitties to show up.  Fortunately, a Kitty who knew that we were to meet at a KS and not a QT pulled in and drug them down to the right gas station.

And here’s another departure for the Burrton ride….the Kitty attire!  There were splashes of red, green, purple, orange, pink and combinations thereof all over the place when the Kitties proved that you don’t, in fact, have to be a little girl or ballerina to wear a tutu!  For those of you who weren’t able to attend the trip, here’s the back story….

Way back in June 2015, we traveled to Atchison, KS for an overnight trip.  After a full day of riding, with a stop in Topeka for lunch, we quickly changed into something more comfortable.    For most of us, that meant shorts or capris and flip flops.  But not our wacky Kitty Sister, Maureen Stout!  She changed into….wait for it….a skirt!  Of course, she was given all kinds of grief and assaulted with comments such as, “who brings a skirt on a motorcycle t

rip?” and “well, aren’t you the fancy one” and “she’s just trying to make me look bad in my stupid capris.”  Now fast forward to the next ride in July and Suz Tiede decided she wasn’t done with Maureen just yet and wore a skirt to the departure location.  Suz made a comment that July morning about what’s next on a motorcycle trip – tutus??  Well, Maureen was a great sport about it all and let just enough time go by before exacting her revenge so no one (meaning Suz) would suspect anything.  She decided that yes, Kitties CAN wear tutus on a motorcycle trip and rallied a number of the Kitties to do just that!  Sure, we got pointed at – snickered at – and eye rolled at, but we all looked so pretty in our tutus that we decided that April will officially be named Tutu Month and from this date forward, all April rides will have two dress code requirements…a Kitty shirt and a tutu!  Well, in Dawn Morse’s case, a fourfour with her longer, fuller version of a tutu.   That’s Dawn for ya, if it’s worth doing, it’s worth overdoing!  Suz hooted and hollered over the joke on her, but was a little put out that even Dawn’s Trunk Monkey had a tutu to wear and she didn’t.  Knowing she would feel that she was just as worthy of a tutu as a Trunk Monkey, another Kitty brought an extra tutu for her to slip on, as well.  There, are ya happy now, Suz?

After all the fun of looking at tutus and other people looking at us in tutus, we welcomed three new riders to the Club.  Brenda Berry, who isn’t really new to the Club as she joined after the last ride in 2016 and attended the Winter Events, was making her debut ride with us; Tricia Carruthers; and Sherri Carver.  This would be a good time to talk about Sherri for a minute.  It seems like for every long-distance Kitty we have, there’s someone who has to outdo the last.  First, we had the Augusta girls of Nellie Taylor, Linda Moreland and Suz Tiede with a 24-mile trip to get to the middle of Wichita.  Then, Amy Hammer said she could do better than that with a 27-mile ride in from Newton.  Not to be outdone, Brenda Berry said that ain’t nothing, I’m going to ride in 34 miles from Milton.  Kathryn Langrehr thought she had it in the bag when she moved to Hutchinson just she could say she came the farthest at 46 miles.  And then there’s Sherri Carver, who said “I got all you bitches beat!  I’m going to ride in 165 miles from Oklahoma City!  I dare one of you to try to outdo me – go on – just try it!”  Uncle Uncle!  You win, Sherri!  I think your record will stand unchallenged for…well, ever… and your official Kitty nickname is Hard Core Kitty!

After introductions were made for the benefit of the aforementioned new Kitties and safety and route instructions given by Kathryn Langrehr, we were ready to roll out with one thing on our minds – Barn Food!

Like a stabled horse, Kathryn Langrehr led us right to the Barn door and after navigating a dicey entrance into the parking lot and pulling in wherever we could find a parking spot, we debiked and stretched our tired muscles from the grueling 34-mile journey.  Nellie Taylor did her best to round everyone up, which was like herding cats – oh wait, we ARE cats – to get everyone inside.  There we were greeted by The Barn staff and assigned our very own waitress who led us to a long string of tables that were all ours.  While some Kitties ordered chicken strips and salads, Suz Tiede and Colleen Williams ordered a cow.  Perhaps they didn’t intend to get the whole cow, but that’s what appeared on their plates.  Seriously, the size of that chicken fried steak was off the charts huge!  Instead of a side of mashed potatoes and green beans, it should come with a side of a to-go container!  (Side note:  I found the notion of Colleen ordering such a gigantic meal rather perplexing since in all the years I’ve known her, I’ve never seen her eat more than thimbleful of food.  I guarantee she’ll be eating those leftovers til Turkey Day!)

During the meal and after we stopped gawking at the side of beef on Suz’s and Colleen’s plates, lots of patches and pins were sold, new Kitty snap jewelry was admired, and Kathryn Langrehr counted out the 50/50 cash.  Holy Fur Balls!  We got 80 bucks in this here flame bag!  Someone is going with home with 40 bucks!  Please let it be me.  Please let it be me.  Please let it be me.  It wasn’t me.  We gave the honors to a patron at the Barn in drawing the winning ticket and BRENDA BERRY was the lucky Kitty who got my 40 bucks!  I’m trying to not be bitter since it was Brenda’s first ride and all, but I swear if I don’t win this year, the claws are coming out!

After several photos at the table, which involved yours truly doing a heave ho with her not so limber body onto a high-top chair, we were ready to get that customary group photo.  Here is what we’ve learned over the years….get everyone in formation BEFORE we recruit someone to take the picture, which is exactly what we did and then accosted, uh, I mean asked, a couple who just got off their bikes to snap a couple of pictures.  Turns out the couple is from Andover and several of the Kitties put on their marketing hats and told the gal all about our Club.   Suz Tiede told me, uh, I mean asked me, to go get a Kitty card for her.  Given that she lives in Andover, she might think she lives too far away to belong to a Wichita Motorcycle Club.  Silly girl….she’s not even a contender.

It was a perfect April ride day with some of the best women a gal could have the privilege of riding with.  We’ve officially got 2017 off to a great start and I’m excited for all the memories we will make together this year!  Those on board for the “Barn Kitties in Burrton” ride were Janice Friedman, Brenda Berry, Kathryn Langrehr, Melaina Phares, Amy Hammer, Alice Friedman, Maureen “Skirt” Stout, Christine Allsman, Denise “Squirrel” Johnson, Tricia Carruthers, Colleen Williams, Suz “Tutu” Tiede, Nellie Taylor, Linda Moreland, Dawn Morse and Sherri “Hard Core” Carver.