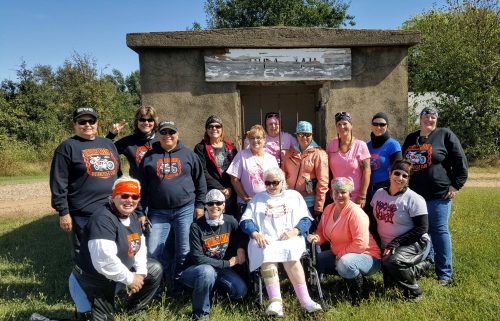 Up until the night before the October 8th ride to Zenda, KS, I was feeling pretty smug about how we managed to make it through the entire season without a freezing cold ride.  After all, it had been beautiful in the days leading up to the ride day, so I had no reason to believe we wouldn’t have more of the same.  Then Bam!  The night of October 7th took a turn for the worse which is so unusual as weather is typically very predictable here in the Kansas heartland, right?  When I got up that Saturday morning, I was psyching myself up for a very cold ride as the temps had dropped into the 40’s overnight.  I sausage-cased myself into about five layers of clothes, took a deep breath, and braced myself for the first step out of the garage.  “Huh.  This isn’t so bad.” I thought to myself.  “Either it’s not as cold as I thought or after 13 years of Fall riding, I finally mastered the art of dressing warm.”  Trying not to be too cocky, I reminded myself the true test will be when I’m actually moving.  And then I started moving and I still wasn’t cold!  Halle – freaking – luiah!  Turns out I wasn’t being smug at all!  I was just being right!  That happens a lot.

Thirteen Kitties poured into the parking lot of the QuikTrip and we hugged our hellos to each other; hugged our welcomes to two new Kitties, Amanda and Leigh Ann; and waved our howdies to Linda’s  Mom, Jackie, who was riding shotgun in Linda’s car.  We pimped the 50/50 tickets and then I called the Litter together to have a quick pre-ride briefing to let everyone know the route and that I would be leading the group and Linda would be the sweep.  That’s when I saw it.  The look of fear that washed over everyone’s faces.  “Seriously, can’t Kari lead?  It’s not that we don’t trust your sense of direction (we don’t) and it’s not that we don’t think you can get us there without having to execute a U-turn somewhere (we don’t), it’s just that we’re very accustomed to riding behind Kari and she’s awesome at getting us where we need to go.”  Words are hurtful, you know, and while they might not have been spoken aloud, they were implied!  Well, who got who to Zenda without a hitch?  That’s right!  This girl!  Truth is….I’m just as surprised as you all are.

Under the outstanding leadership of yours truly (that’s right, I said it, all you Doubtful Debbies!), the ride to Zenda was uneventful and NOT cold, which was the best part.  However, the road south of Highway 400 to Zenda was a mess.  Potholes everywhere and a good amount of gravel scattered all over the place.  Hey, Kansas Department of Taking Care of the Roads, how about you bring your road making machines to 90th Street and Highway 400 and fix something!   We filed into Zenda and got ourselves parked and immediately started shedding our sausage casings.  This day is getting warmer and warmer by the minute!

The Lumberyard Restaurant had our tables all ready and after we all got settled in, I did what KKMC has only ever done once before.  We bequeathed an Honorary Krome Kitty status to Jackie, which of course comes with a complimentary Kitty shirt.  Jackie is Linda Mom and Linda is her primary caretaker so often times, where Linda goes – Jackie goes.  The first Krome Kitty Honorary status had been given to our dear departed Marjorie Bare, who at the time she was named an Honorary Kitty, was 105 years old.  We decided we didn’t need to make Jackie wait 20 some years for her bequeathment (Is that a real word?  I’m not sure, but it sounds impressive.)   This was Jackie’s second outing with the Kitties as she had also attended the YWCA Ice Cream Social in July.  Looking down the long table at all the Kitties, Jackie must have felt right at home as she birthed and raised EIGHT, let me say that again – EIGHT – children!  Jackie, this may come as a surprise to you, but you don’t have eight children, you have 33 children as we all consider you to be our Honorary Kitty AND Mom!  You are a warrior and delightful and we are thrilled to have you as part of our Litter!  We welcome, and encourage, you to ride shotgun in the cage any darn time you please!

We placed our orders of hamburgers, salads, sandwiches, chicken fingers, steak fingers, lady fingers butter fingers, lift-a-fingers, sticky fingers, trigger fingers, crossed fingers, burned fingers, snapped fingers, bony fingers – OK, I’ve taken this too far – and of course, made certain there would be ample pie by ordering it sooner than later.  Then the anticipated moment came of who was going to win the 50/50 pot!  Honoring my vow to not complain about never winning since I was gifted such a wonderful white leather Harley coat last month, I will not ramble on about how once again I didn’t win.  I’ve never won.  Probably never will win.  How many seasons must I endure this?  We gave Honorary Kitty Jackie the honors of pulling the ticket and drumroll please……ALICE was the lucky (luckier than me) winner of $40.00!  Rumor has it she was leaving for vacation the next day and this would be used to buy something pretty or pay for dinner for her and Tom Kat Gary.  My money is on buying something pretty.  And Drats!  How did I not get a picture of Alice and her newfound windfall??

As we were eating our delicious Lumberyard food, Sherri yelled from down yonder, “Hey Janice, there’s a girl here and she wants to talk to you about becoming a Kitty!”  Wait.  What?  There’s a girl in Zenda, Kansas USA who wants to be a Krome Kitty?  Turns out the girl, Brenda, is from Suppesville and had just purchased a motorcycle in May from a bike shop in Hesston.  While there, she was commenting to the salesman about how she wished she had people to ride with and get this!  He said, “You need to hook up with the Krome Kitties!”  What. The. Heck??!!   I don’t know how in heaven’s name he knows about us, but we’re famous!  Or maybe it’s more like infamous, but nevertheless, I was blown away that he would know about us and recommend her to us.  Anywhoo, we talked a bit and she was very excited about joining and even though this was the last ride of the season, she wanted to join us for our winter activities to get to know us a little better.

This was the second time the Kitties had pointed our noses to Zenda.  The first time was way back in September 2008.  As we did then and must do now, we had our picture taken in front of the ittsy bitsy tiny Zenda jail.  What immediately struck me as we approached the jail was the sign was in pretty sad shape.  You could hardly read the words “Zenda Jail” on the board, whereas in 2008, it was very legible.  When I commented on how the sign had not aged well at all, Bobbie mumbled something about, “Yeah, well neither have you.”  After what was a record for getting a group shot taken in a timely fashion, we noticed Bobbie was INSIDE the jail.  We then decided to impose upon our Waitress/Photographer for one more group shot inside the Pokey and then decided it was time to bike up and head back east to Doo Dah.

We all agreed there was no reason to travel back down that dilapidated old road to Highway 400 so we would take Highway 42 to Highway 14 north to Kingman, where we would stop for those who needed gas.  At the gas station, Bobbie suggested we take the Old Highway 54 to Garden Plain to avoid the hustle and bustle of Highway 400.  I indicated I didn’t know where that was and she said, “I remember where it is, so I’ll lead.”  Bobbie came through for us and led us down a lovely scenic route and as I looked to the left, way over there was Highway 400 with lots of trucks zooming along while we had this road all to ourselves.

That’s a wrap and drop the mic!  We had a great season of rides and comradery; we added two new Kitties (Amanda and Leigh Ann); we finally got Alice moved here from Colorado and she was able start riding with us; we re-added one Kitty (Sherri); we bestowed Honorary Krome Kitty status to Jackie; we met, ate and rode with Suz’s family in Ponca City in April; we Zoo’d it with the YWCA Moms and Kids in May; we met Chinese Jesus in Van Buren, AR in July; we Dali horsed around in Lindsborg in July and in the same month, we Ice Cream Socialed with the YWCA Moms and Kids and overstuffed their van with needed items; we swung on a bridge in Moline in August; we Tom Katted our way to Cottonwood Falls in September; and we did prison time in Zenda in October.  A great big HUGE thank you to each and every one of the Kitties for making our 12th riding season one to remember. A MASSIVE thank you to Suz and Denise for finding us fun and interesting places to go this season! The Kitties rock in so many way, but the friendships we’ve made and strengthened has to be at the top of that list.  Winter activities will be announced soon so make time to stay connected and until we ride again in April 2017, keep the shiny side up!

Those on board for the  A Zen Kind of Day in Zenda were Janice, Leigh Ann, Melaina, Alice, Bobbie, Kari,  Christine, Sherri, Colleen, Nellie, Linda, Amanda, Dawn and Jackie.